The Authentic Afghan Platter That Will Get Your Belly Dancing 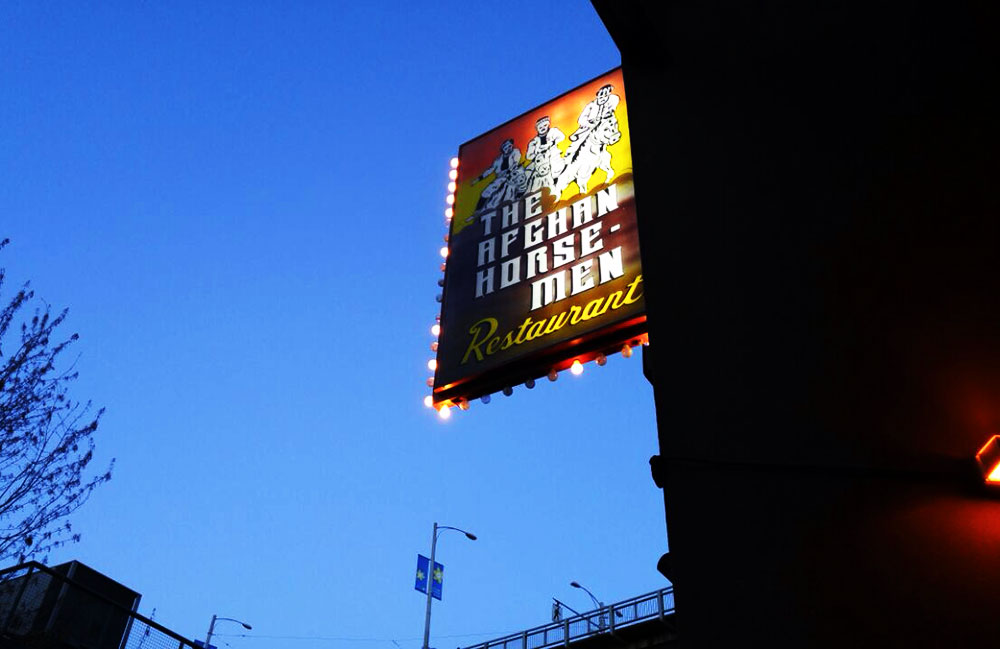 Located near the entrance to Granville Island, The Afghan Horsemen Restaurant is a hidden gem that you won’t want to miss! Established in 1974, Afghan Horsemen was the very first Afghan restaurant in Canada. Winner eight years straight for Best Middle Eastern Restaurant from the Georgia Straight’s Readers’ Choice Golden Plates Award, this family-run kitchen brings the most authentic Afghan cuisine in B.C. with the freshest of ingredients.

Afghanistan has a rich cultural heritage, and its cuisine is mainly influenced by old Persia (now Iran), Greece, India, and Mongolia. Afghans like their food neither too spicy nor too hot, and their flavours include cardamom, turmeric, cinnamon, cumin, saffron, cloves, coriander, garlic, black pepper, cilantro, dill, mint, onion, and tomatoes. The meals are usually served with a side dish of rice and a dressing of yogurt. 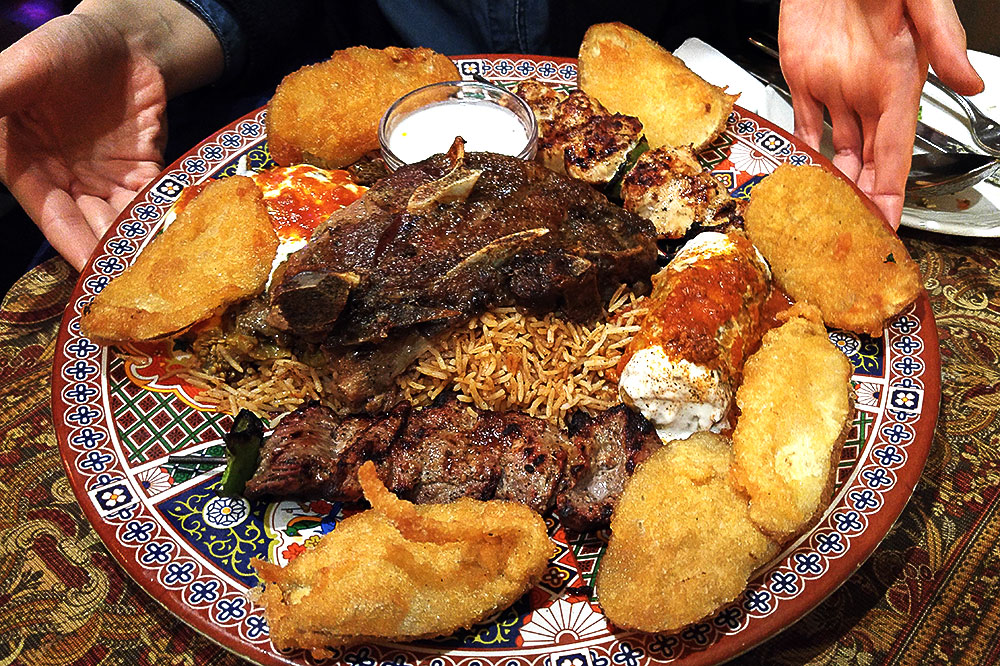 To explore as much of the cuisine as possible, I ordered the Horsemen’s Special Platter, a great way to try the food and share with friends. It started with an appetizer of humus and Sabzi Mast (yogurt dip with herbs), a salad with feta cheese, and whole wheat pita bread. This was a nice introduction to Afghan cuisine.

On the outside of the platter was the Pakawra (batter fried potatoes). These “Afghan french fries” were chewy, crunchy, and very addicting! The Dolmah (cabbage roll with rice) was topped with yogurt to make the cabbage roll moist and tasty. The baked eggplant was cooked in a unique, delicious tomato sauce. 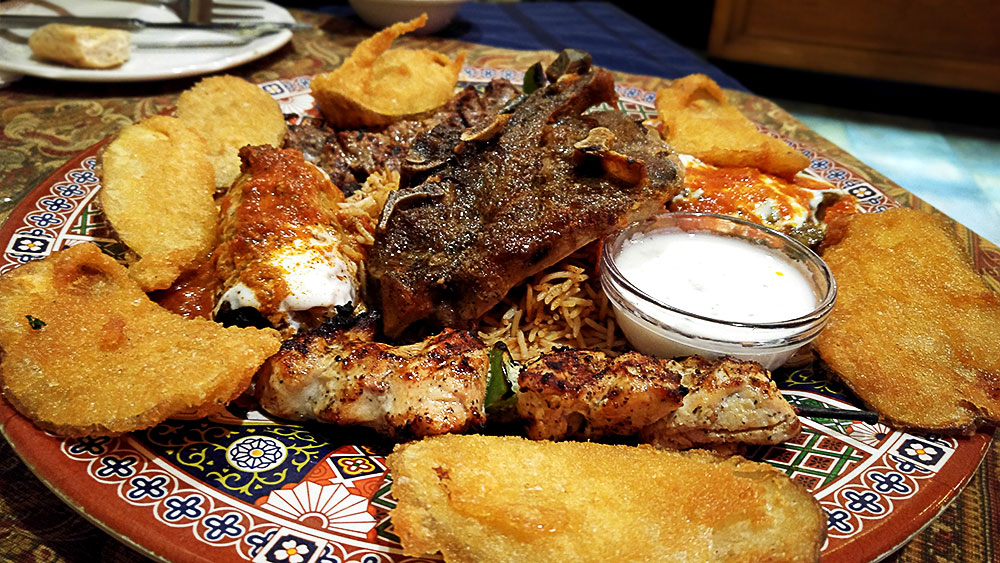 Now, onto my favourite part – the meats! The lamb shoulder was the star of the night.

It was tender, juicy, and flavourful, and the meat literally fell off the bone. Soft like braised meat, the lamb shoulder was cooked to perfection, and surprisingly, wasn’t gamey at all. All non-lamb lovers should give this a shot! 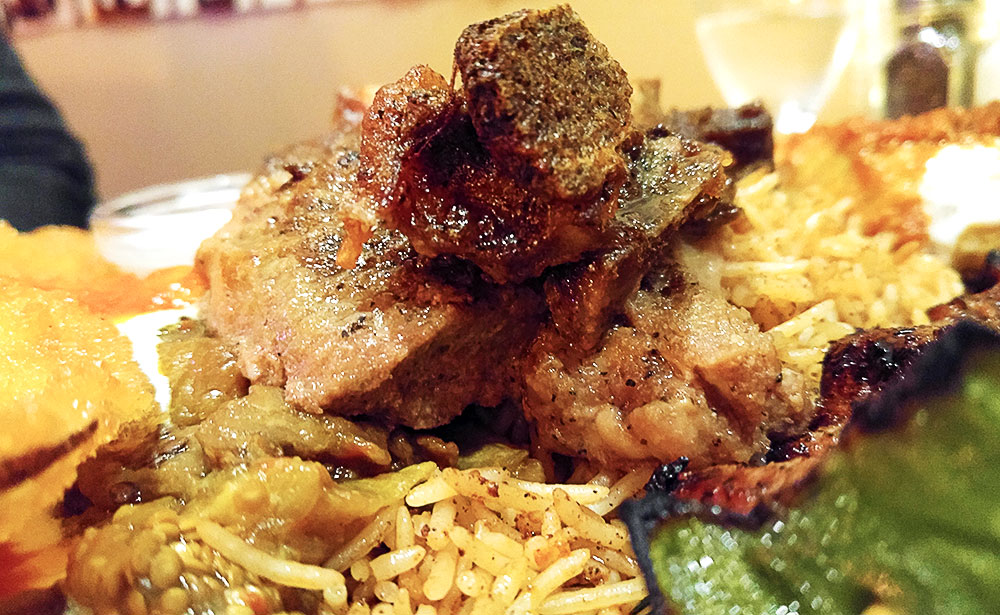 I substituted the lamb kebab for beef (free of charge) so I could try another type of meat. The beef kebab was seasoned perfectly, slightly crispy on the outside, and not overcooked on the inside. The chicken kebab was tender and flavourful, but a bit too charred for my liking. The kebabs came with grilled peppers, which added colour to the dish.

Under the meat was the basmati rice, which complemented every item on this platter. Imagine all the meat sauce, eggplant tomato sauce, and cabbage roll delicacies being soaked into the rice. It was so yummy! Overall, the spices and seasonings were used in perfect amounts – not spicy nor salty. I could definitely taste the garlic, cilantro, saffron, cumin, and turmeric. 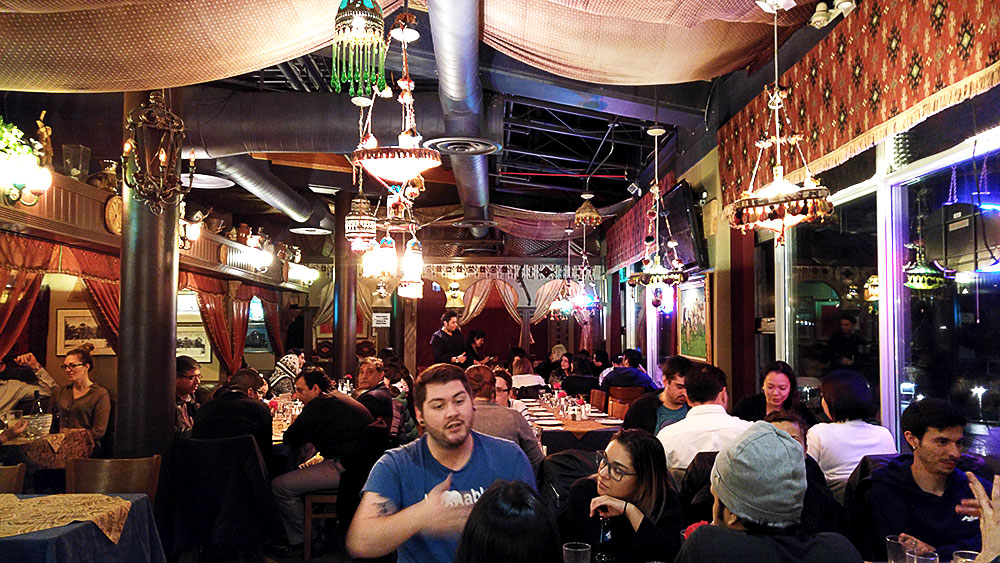 The ambience at Afghan Horsemen was very fun and true to their heritage. The music was also true to the country. In addition to the authentic Afghan cuisine, Afghan Horsemen also offered traditional Afghan dining on floor cushions or at a table. If you’re there on a Friday or Saturday night after 8pm, you’ll enjoy entertainment from belly dancers.

Service was excellent and the staff were always friendly and attentive to requests. I highly recommend making reservations for Fridays and Saturdays as they tend to be full house on those days. When it’s busy, the food may take a bit longer to arrive at your table, but it’s worth the wait!